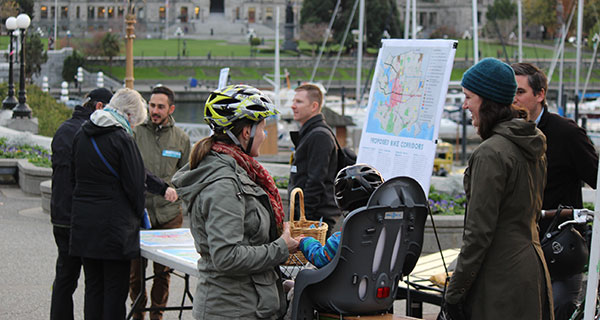 10 Nov #BIKETORIA in the Rain: Our Weekend Engaging Residents in Victoria

Cycling is a hot topic in Victoria these days, and with good reason. The City of Victoria has committed to building an All Ages and Abilities (AAA) bike network by 2018. 8 80 Cities is part of an international team of consultants that’s been tasked with identifying and designing this world-class network. Our team has analyzed the City’s existing infrastructure and policies, and recommended a 30km network that will be within 400 metres of every school and almost half of every resident by the end of 2018.

8 80 Cities visited Victoria over Halloween weekend to launch this #BIKETORIA project and to talk with the community about the proposed network. With maps, sticker dots, markers, plenty of free snacks (lots of Halloween candy and apples) in tow, team members from 8 80 Cities, Urban Systems, and the City of Victoria collected feedback and ideas from more than 400 residents. This latest phase of bike engagement began on November 1 at the Cook Street Pop-Up event hosted by the Greater Victoria Placemaking Network and the Greater Victoria Cycling Coalition, where residents test rode a separated bike lane and provided input on the proposed AAA network. Immediately following that, nearly 200 residents came to hear Mayor Lisa Helps, Gil Penalosa of 8 80 Cities, and Mia Birk of Alta Planning + Design speak about the future biking in Victoria. On November 2, the #BIKETORIA team displayed information about the AAA network and collected resident feedback during the #BIKETORIA Engagement Labs at the Central Library and at Wharf and Government.

Drowning in paper and still coming down from our sugar highs, the 8 80 Cities team is currently in the process of analyzing the feedback and reporting our findings. The next phase of engagement will take place in early December when we’ll head back to the community to ask residents for feedback on detailed concept designs for the 2018 AAA network. Stay tuned for more details!